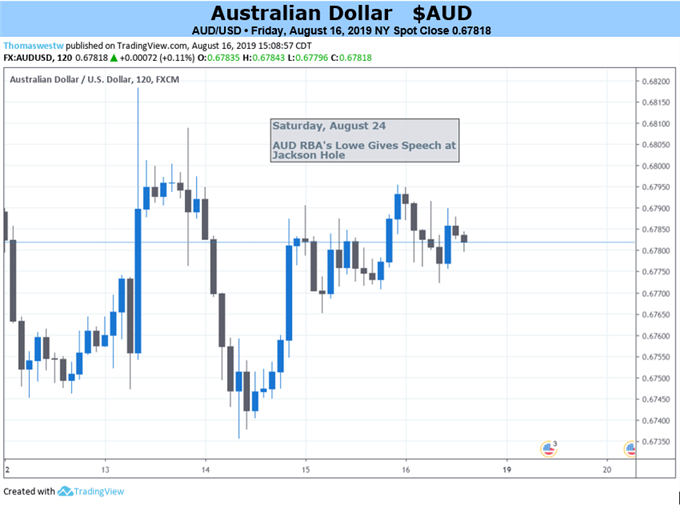 The Australian Dollar remains close to this month’s eleven-year lows against its US cousin with overall global risk appetite continuing to drive sentiment towards this most pro-cyclical currency.

There were some bright spots for the Aussie last week. News that the US will delay imposing further tariffs on some Chinese goods gave global investor sentiment a lift, as did reports that Chinese negotiators will be heading for Washington for trade talks next month.

On the domestic front, it was clear that Australia’s extraordinary job-creation record remained unblemished. July’s official labor-market figures made a mockery of forecasters with 41,00 new jobs on the books rather than the 14,000 expected. There was a solid rise in full-time employment to boot.

However, it is notable that those strong labor numbers did absolutely nothing to market expectations that the record-low 1% Official Cash Rate will slide to just 0.5% by the start of next year. That was the futures curve’s position before the data, it remained so after.

That surprise half-point rate cut from the Reserve Bank of New Zealand this month has seen a solid re-pricing lower of OCR expectations that it is clearly going to take a lot to shift.

No such shift is likely this week, which is a quiet one for economic data. Central bank meeting minutes are due from both the RBA and the US Federal Reserve, but they are unlikely to alter the overwhelming view that rates are headed down in both countries. Australian Purchasing Managers Index figures are coming up too. They’ll attract plenty of investor attention but, again, won’t change the backdrop.

Keep an Eye on Jackson Hole

The Australian Dollar will be left as usual then to the ebb and flow of the risk trade. The risk trade in turn will depend on hard-to-predict headline news. There will also no doubt be plenty of focus on the Kansas City Fed’s annual Jackson Hole central bankers’ fest. That kicks off on Thursday with RBA Governor Philip Lowe saving his speech until Saturday.

In short then it’s hard to get bullish about an Australian Dollar so bereft of domestic monetary policy support, but the risk trade could yet lend it some support for as long as there are clear signs that Beijing and Washington intend to keep talking on trade. Therefore, it’s a neutral call this week. 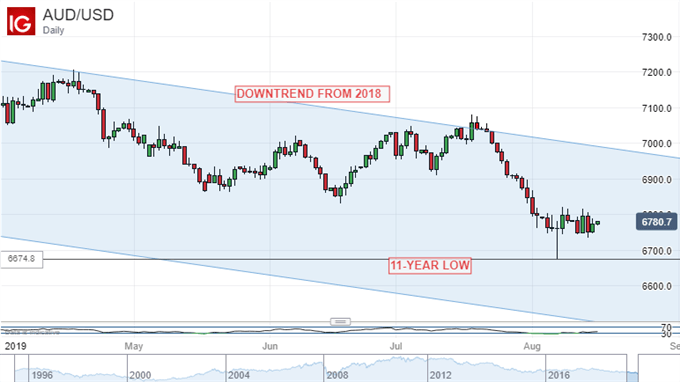