The Kospi Index rose after South Korea’s chip exports rose 5.3 percent on a year-on-year basis with overall imports showing an increase of 5.7 percent over the same time frame. USD/TWD fell after at the start of the session following the Taiwan election over the weekend that saw the independence-leaning candidate win in a landslide victory over her pro-China counterpart.

The British Pound may fall if manufacturing data underwhelms and reinforces fears of a continuous industrial slowdown amid ongoing Brexit uncertainty. This is not specific to the UK: the world has been facing an industrial recession for over a year amid the US-China trade war. The United Kingdom has experienced double the pressure from geopolitical risks both at home and overseas.

Year-on-year manufacturing production is expected to shrink to 1.6 percent, lower than the prior -1.2 percent figure, with another similar indicator showing a -1.3 percent estimate, unchanged from the previous period. If the data underwhelms, it could inflation easing expectations after the Bank of England said that persistent weakness could “require a prompt response”. Sterling promptly fell against its major G10 counterparts. 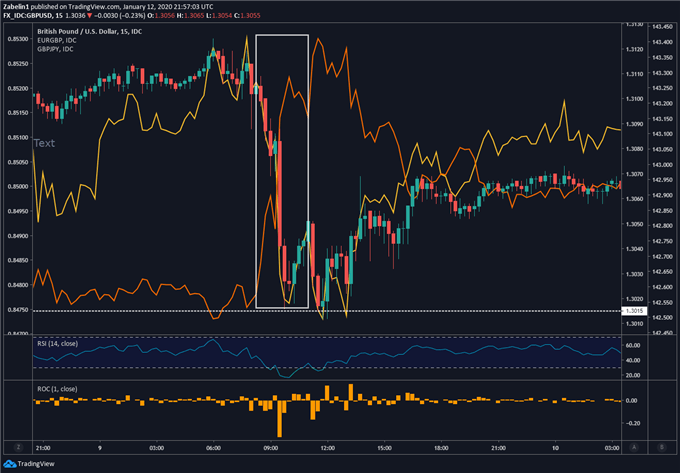 Overnight index swaps are currently pricing in a 70.4 percent probability of a rate cut by the meeting in August, with those instruments shows a 100 percent chance of easing by December. According to the Citi Group Economic Surprise Index, data out of the UK has been tending to underperform relative to analyst’ estimates since November 2019. If this trend continues and key statistics continue to miss, the timeline for easing may be brought forward at the expense of the British Pound.

As outlined in my EUR/GBP forecast, the British Pound may fall despite expectations that the UK will officially depart the from EU on January 31. After breaking below the October 10 uptrend, the British Pound index has traded with little indication of a clear direction as it bounces between the upper and lower boundaries of the 1.8532-1.8676 range. A downside breakout, catalyzed by political uncertainty, could precipitate a selloff. 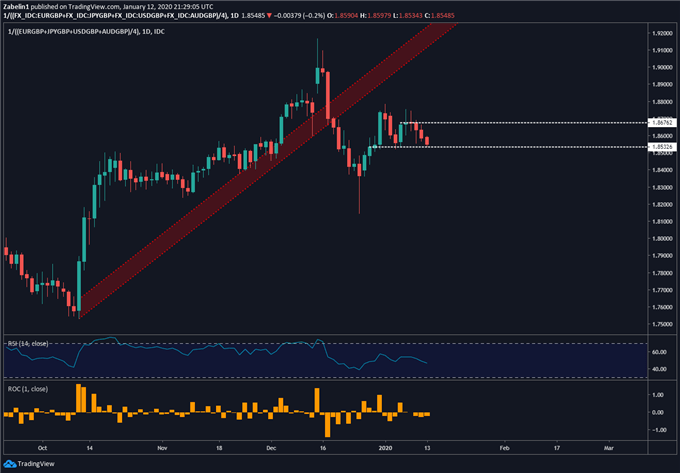