Brent crude futures edged higher this morning, with gains of over 1%. The latest rise had been attributed to reports from the Saudi Arabian Energy Minister that they were going to continue its aggressive plan to curb its crude output. Reports stated that Saudi Arabia will reduce its oil production to around 9.8mbpd in March (10.25mbpd according to Refinitiv), as such, this would see Saudi crude production 500kbpd below its 2019 target (10.311mbpd). 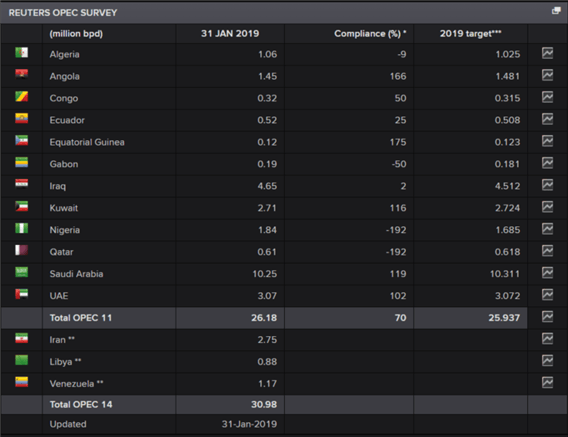 Oil watchers will be placing a close eye on the OPEC monthly report, which will take into considering the supply cut agreement made by OPEC+ at the backend of 2018. Consequently, it is likely that OPEC production would have seen a notable drop in production in January, with Saudi Arabia bearing the brunt of it. Elsewhere, given the concerns surrounding rising US crude production, focus will be on tonight’s API crude oil inventory report.

Net Oil Importers: These countries tend to be worse off when the price of oil rises. This includes, KRW, ZAR, INR, TRY, EUR, CNY, IDR, JPY

Net Oil Exporters: These counties tend to benefit when the price of oil rises. This includes RUB, CAD, MXN, NOK.

What Traders Need to Know When Trading the Oil Market

Important Difference Between WTI and Brent