High-impact event risk surrounding the G20 Summit in Osaka, Japan this weekend looks set to stir currency volatility. According to various USD/CNH implied volatility measures, forex option traders are pricing in the most expected volatility since early May when US President Trump announced plans to increase tariffs. The last time USD/CNH implied volatility climbed this steeply, spot prices ascended sharply from the 6.75 handle to the 6.95 level in a matter of days as the Chinese Yuan depreciated against the US Dollar in response to trade war escalation and rampant risk-aversion. 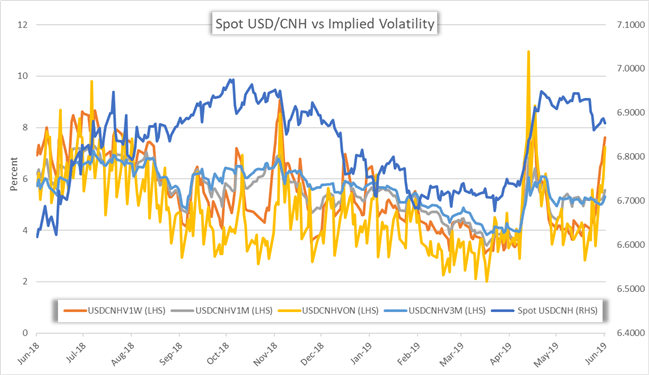 The renminbi has attempted to trim some of its downside against the greenback subsequent to the release of the China Trade War White Paper, however, which detailed the Asian nation’s open-mindedness to continue trade negotiations with the United States. Shortly thereafter, risk assets like stocks and the CNY jumped when news broke that Trump and Xi will meet on June 29 at the G20 Summit. While it seems that the dust has since settled from the flareup in trade tensions at the beginning of May, little is expected in terms of substantive progress toward landing a trade deal between the world’s largest two economies.

Yet some optimism has emerged that trade relations could get back on track and prompt President Trump to delay hiking tariffs on China – as he did earlier this year citing trade talk progress. As such, it appears that much is riding on the upcoming Trump-Xi meeting at the G20 summit in Japan this weekend. 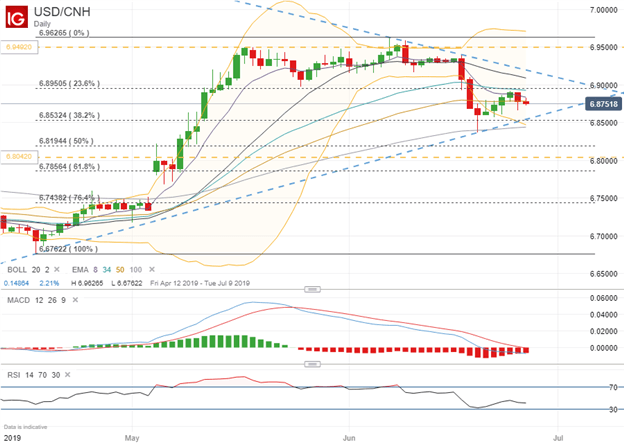 If US and China trade negotiators can find some common ground and relations do in fact show material improvement, spot USD/CNH threatens to whipsaw lower. News that President Trump will no longer pursue levying additional tariffs on China is a probable catalyst for this scenario. In response, reduced pressure on that the People’s Bank of China (PBOC) to combat US tariffs and the downfalls of an escalating trade war by depreciating the Yuan could keep spot USD/CNH bid. Conversely, spot USD/CNH risks rising if the US China trade war gridlock intensifies or simply drags on.

That being said, USD/CNH 1-week implied volatility of 7.62 percent can be used to calculate the currency pair’s 1-standard deviation trading range of 6.8042-6.9492 which, statistically speaking, encompasses price action 68 percent of the time. Spot USD/CNH has wedged itself between a short-term bearish downtrend and longer-term rising bullish trendline with the tightly-coiled currency pair looking primed to breakout soon which is further suggested by evidence of rising Yuan currency volatility. The 23.6 percent and 38.2 percent Fibonacci retracement levels of the leg higher from late April to early June, which look to serve as nearside technical resistance and support respectively.

Connect with @RichDvorakFX on Twitter for real-time market insight