The US Dollar managed to close this past quarter without having to commit to a systemic bullish or bearish trend – much like broader risk benchmarks such as the Dow. It will prove difficult for the benchmark currency to avoid a clear drive through the second half of 2020 as more critical systemic issues come to a head.

Through the opening week of the new month, quarter and half; the Greenback looks like it may weigh in on its often-assumed sacrosanct safe haven status. Through the past few weeks, the inverse correlation between the DXY Dollar Index and the S&P 500 was remarkably acute. That is a change from the carry status the currency held in 2019. Should the rise of the coronavirus cases in the United States (and around the world) trigger another avalanche in capital markets, the Dollar will likely see its profile swell again. Yet, that role is not certain.

A serious caveat to the most liquid currency moving forward is the growing hostility of the United States towards its major counterparts – both trade rivals and partners. While the carry over trade war with China is taking on a new life as the White House increasingly ascribes blame for the global pandemic on the country, there are tensions arising even with the European Union. This policy uncertainty is likely to only increase as the US election comes into view (November 3rd). Watch this thread unfold starting in this very first full week of the new quarter. 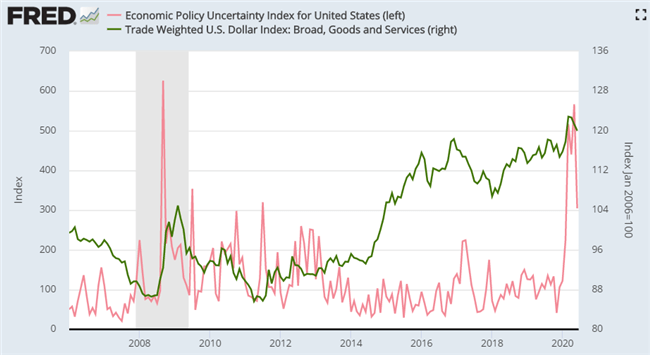 See the full fundamental and technical analysis of the US Dollar for the third quarter in our new guide.

Get Your Free USD Forecast