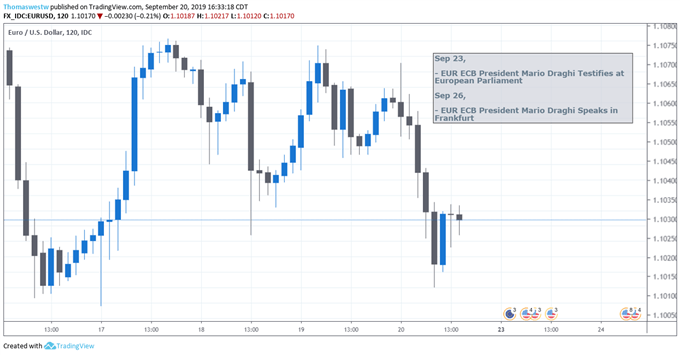 Get our free guide to help build confidence in your Euro trading strategy!

The Euro faced renewed selling pressure in the first week since the ECB announced a reboot of quantitative easing (QE), issuing the lowest close in two years against a basket of its major currency counterparts. Breaking down its performance suggests the weight of local monetary policy was not the driver du jour.

The lion’s share of losses was sustained against the anti-risk group within G10 FX: the Yen, US Dollar and Swiss Franc. That speaks to broader risk-off forces at work. That downswing was tellingly triggered midweek in the aftermath of an FOMC rate decision that disappointed the markets’ ultra-dovish expectations.

The week ahead offers a potent mix of internal and external influences. Testimony from ECB President Mario Draghi in the European Parliament as well as September’s flash Eurozone PMI surveys will set the tone on Monday. Mr Draghi might make the case for a dovish policy tilt, and the data may well support him.

He will likely do so again on Thursday, with the ECB’s monthly Economic Bulletin swapped in for background. The upshot ought to be broadly consistent however: growth in the currency bloc is at its slowest in close to five years, spurring the central bank to pile on monetary accommodation.

Looking abroad, US-China trade talks and the sprint to put Brexit on a clear trajectory will help set the tone for sentiment. Chinese officials appeared to leave the US in a huff on Friday, which does not bode well. UK Prime Minister Boris Johnson and EC President Jean-Claude Junker seemed to get along however.

While markets default to hopeful optimism any time Beijing and Washington so much as hint at talking about a trade pact, every round of such negotiations since Donald Trump became president has led to higher tariffs. This doesn’t mean a deal is impossible, but a healthy dose of skepticism seems warranted.

In the UK, the Supreme Court is expected to rule on whether Boris Johnson is allowed to suspend (‘prorogue’) Parliament, which he has done to pursue Brexit on his own terms. An uproar is likely no matter what happens. If Mr Johnson loses, EUR/GBP weakness might pull the Euro lower more broadly.

A win may not be as supportive as a loss would be painful however. Mr Johnson is cavalier about the prospects of a ‘no-deal’ Brexit, which would be destabilizing for the Euro area. If he prevails, a rise in EUR/GBP may not be enough to offset broader headwinds amid increasing divestment from the region.

On balance, this suggests the path of least resistance leads lower for the single currency. The current environment is sufficiently surprise-prone to throw all standard considerations out of the window, but the likelihood of weakness appears to be asymmetrically higher than the alternative.

US Dollar May Rise if US GDP Data, Trade War Risks Spook Markets

MARTIN LEWIS has warned that given the dramatic