The British Pound accelerated its selloff from Friday, tumbling against its major counterparts on Monday and falling the most against the US Dollar over the course of 24 hours since November 2018. Similar to why it fell last week, the fundamental backdrop is related to rising concerns that the United Kingdom could crash out of the European Union on the October 31deadline without a divorce agreement, or “no-deal”.

The GBP/USD selloff picked up pace after UK Foreign Secretary Dominic Raab said that the “undemocratic” Irish Backstop – a sticking point in UK-EU negotiations – “must go”. The EU has made it loud and clear that this is a non-negotiable term in the Brexit process. As Prime Minister Boris Johnson later added that the backstop “must be removed” to avoid a no-deal, Sterling continued its plunge.

Taking a closer look at the British Pound, we saw it take out near-term support at 1.2366 which is the April 2017 lows. This has opened the door to perhaps reaching March 2017 lows while descending channel resistance from late April – parallel red lines on the chart below – guide it lower in the medium term.

GBP/USD – Chart of the Day 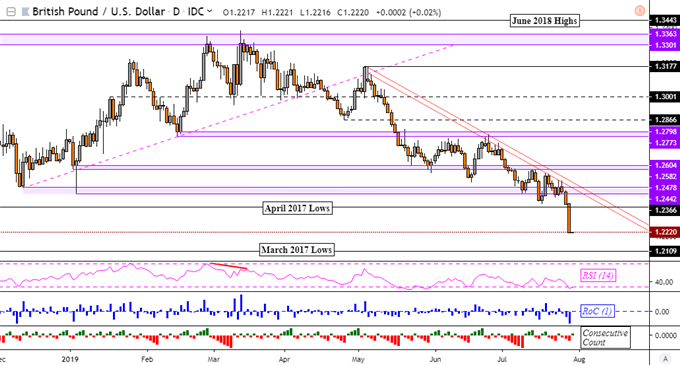 Against a basket of its top four liquid counterparts, the highly-liquid US Dollar outperformed and extended its advance after clearing key resistance last week, as anticipated. Meanwhile, pro-risk currencies such as the Australian and New Zealand Dollars aimed cautiously lower with the bulk of their underperformance occurring during the first half of the session.

S&P 500 futures are little changed heading into Tuesday’s Asia Pacific session after a mixed performance on Wall Street. By the end of Monday, the US benchmark stock index closed 0.16% to the downside. It was led lower by financials, particularly bank shares. While information technology stocks initially declined, they ended the session little changed.

Some hesitation in financial markets could be forgiven given the plethora of event risk this week such as the Fed. Over the next few hours, and perhaps during a window between 2:45 – 3:30 GMT we will get the next Bank of Japan monetary policy announcement. However, no change in their policy tools are anticipated with the focus placed on their forward guidance and could make for a muted reaction in the Japanese Yen.