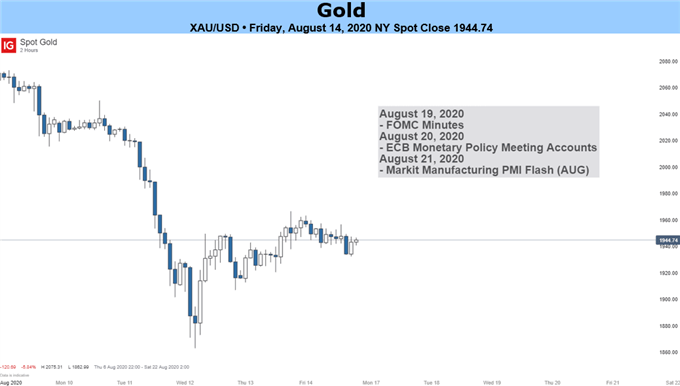 Gold prices wobbled this past week, dropping 5.72 percent on Tuesday in what was the worst performance over the course of 24 hours since 2013. At one point, XAU/USD temporarily wiped out all progress it made over the last 3 weeks in a span of two days. It was the worst week in 5 months. Such volatility ought to serve as a reminder for traders of gold’s relative inferiority when it comes to liquidity compared to fiat currencies.

What is the outlook for gold this quarter?

Gold’s performance this past week could be a foreshadowing of what the yellow metal might eventually succumb to in the medium term. Longer-dated government bond yields from developed nations rose aggressively last week. On average, the 10-year yield from the US, Germany, Japan and Australia climbed to its highest since late June.

This could be a combination of rising inflation expectations and an improving outlook for economic growth down the road. Eventually, when interest rates start rising again from near-zero levels, the appeal of gold may start to decline. But that is down the road. In the short run, XAU/USD could remain elevated as central banks refrain from raising borrowing costs.

In the near term, sudden and aggressive risk aversion could accelerate declines in gold. This is similar to what was witnessed earlier this year when global equities tumbled amid the coronavirus outbreak. That is when the haven-linked US Dollar aggressively appreciated as the world’s reserve currency. With that in mind, what are some fundamental risks XAU/USD could encounter ahead?

Rising US-China tensions are one thing. Officials were originally set to review the phase-one trade deal after 6 months this weekend. According to data from Bloomberg, China is falling well short of US agricultural purchases. At this point, agricultural exports from the US to China should amount to around US$17 billion. In reality, the value is closer to roughly $6.5 billion.

Still, White House Economic Adviser Larry Kudlow said that the trade deal is “fine” and that China is “substantially” ramping up purchases of local goods. These talks were postponed indefinitely according to people familiar with the matter. Still, traders should be wary of the risk of verbal jabs between the two nations. Otherwise, this could be one less downside catalyst for gold to worry about in the short run.

Another concern is the ongoing stalemate in a second US fiscal stimulus package, but markets may be betting on an eventual deal. President Donald Trump’s executive order to extend certain provisions of the original deal may also be aiding to keep market volatility at bay. If longer-dated government bond yields continue their upside momentum, gold may find it increasingly harder to set higher highs.

Having said that, the near term prospects still seem to be favoring the upside. Last week, Dallas Fed President Robert Kaplan noted that he is willing to see inflation run above the 2% target subject to conditions. Ultra-lose monetary policy prospects would likely continue favoring the upside for the yellow metal. 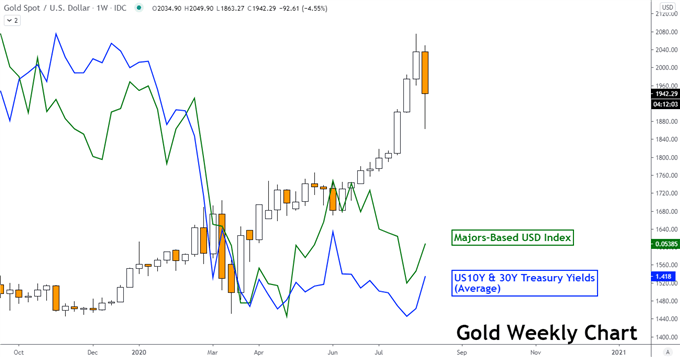