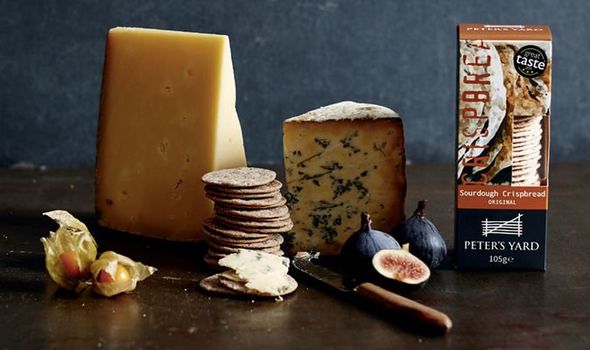 Swedish-inspired and left to ferment and bubble for 16 hours before baking, the fibre-rich sourdough and other natural ingredients for its 14 products have led to them being voted tops for taste numerous times since production began nine years ago. Over the time output by the north London-based producer has risen to 7,000 kilos a week, and forecast sales of over £5 million in 2019 to speciality stores, grocers, food service and export.

Among more than 2,000 customers are delicatessens, Michelin-star restaurants, Fortnum & Mason, Selfridges, Waitrose and Sainsbury’s as well as British Airways and Virgin passengers.

It also sells directly through its online store.

Embraced by foodie-loving Millennials – 50 per cent of consumers are aged 20 to 34 – Peter’s Yard set out to redefine crispbread as an authentic, delicious alternative to good artisan bread.

In the process it has shaken up a staid category more associated with punitive dieting than pleasure, explains co-founder and joint managing director Wendy Wilson Bett.

“Our range is two to three times more expensive than mainstream competitors for whom we are now a challenger brand. But we’re growing 12 times faster than the category, showing that people recognise value.

“We’ve chosen not to go down the white label route because our goal is building a brand with roots.

“Yet when we first bounced our idea off industry experts they said people would never pay a premium price, nor could we change perceptions about a product usually associated with slimming.

“Over the past few years however the desire generally has grown for good food to be delicious and nutritious. Snacking and sharing are far more popular too, all factors in favour of our crispbreads.”

“The taste of our sourdough crispbread is clean with a tang, the texture light, not floury or pasty, so the flavours of each variety of cheese are enhanced,”

And like its compatible sourdough, Peter’s Yard has been shaped by partnerships and strong fundamentals.

Wilson Bett and co-founder Ian Tencor decided to start their own business after they met while working for Cadbury Schweppes and reckoned their respective expertise, Wilson Bett in management and marketing and Tencor supply chain and finance, made a powerful combination.

Tencor, whose wife is Swedish, had lived in the country and long wondered why its baked products, including the iconic large sourdough discs that sustained rural folk over hard, snowy winters there, had not found a market in the UK.

That led to Tencor and Wilson Bett joining Swede Peter Ljungqvist who was running a bakery café in Edinburgh where authentic crispbread was going down a treat.

Originally the Peter’s Yard team imported the product from its homeland, but as sales grew the decision was made to bake in the UK.

Conveniently another entrepreneur John Lister, founder of Shipton Mill, who had been supplying flour to the café also had a craft bakery in London.

He pitched in and this is where production continues to this day, with the four stakeholders still at the helm along with a core team of 12 handling operations plus the bakers.

Being listed by Waitrose was a turning point for the business.

“We recognised we had to balance this while still supporting our loyal customer base of farm shops and delis and managed it carefully,” says Wilson Bett.

“With Waitrose came a marked change in brand awareness and enabling us to position ourselves nationally. Another step up came when we went into Sainsbury’s a year ago.”

In a further move last summer marking its higher profile the company also took part in the new Christmas in July Festival, a promotional event that provides businesses with a cost-effective way of showcasing their products and festive offerings.

But what is it about sourdough that pairs it so perfectly with cheese?

“The taste is clean with a tang, the texture light and not floury or pasty, so the flavours of each cheese are enhanced,” Wilson Bett explains.

“Time is our most precious ingredient, we nurture our sourdough like it’s part of our family.”

Profits have so far provided the majority of funding.

“We jumped in at the deep end, but are now at the next stage and we want to establish in the US,” she adds.

“To accelerate that growth and the opportunities, we’ll need specialist expertise and more backing.”

Self Assessment tax return: Taxpayers urged to appeal penalties as HMRC 'gets it wrong'

SELF Assessment tax returns are due this week