Not sure where the US Dollar is heading next? Check out the third quarter US Dollar fundamental and technical forecast!

The US Dollar outperformed against most of its major counterparts on Friday, propelled by better-than-expected second quarter US GDP data. GDP clocked in at 2.1% q/q versus 1.8% anticipated and from 3.1% prior. Personal consumption, which accounts for the vast majority of growth, rose 4.3% versus 4.0% expected and from 1.1% in the first quarter.

Local government bond yields rallied on the data and by the end of Friday, odds of a third Fed rate cut by year-end weakened. Yet, this was not enough to sour sentiment ahead of this week’s monetary policy announcement. The S&P 500 ended the day about 0.75% to the upside, particularly propelled by communication services.

USD gains undermined the Australian and New Zealand Dollars, which were trading lower after a dose of risk aversion during Friday’s APAC session. The British Pound also underperformed on Brexit woes. Newly appointed UK Prime Minister Boris Johnson told French President Emmanuel Macron that the Irish backstop, a sticking point in withdrawal negotiations, “must be removed” from the divorce deal.

A lack of critical economic event risk at the beginning of a loaded week places the focus for FX on risk trends. We may saw Asia Pacific equities follow Wall Street higher which would translate into a cautiously optimistic mood for financial markets. This may end up boding ill for the anti-risk Japanese Yen as the US Dollar extends its advance.

Last week, the US Dollar accelerated its long-term uptrend when comparing it to an equally-weighted basket of its top 4 liquid counterparts (EUR, JPY, GBP, AUD). Near-term resistance was taken out as prices stopped short of the April 2017 high. Closing above this opens the door to perhaps testing March 2017 highs given technical confirmation. 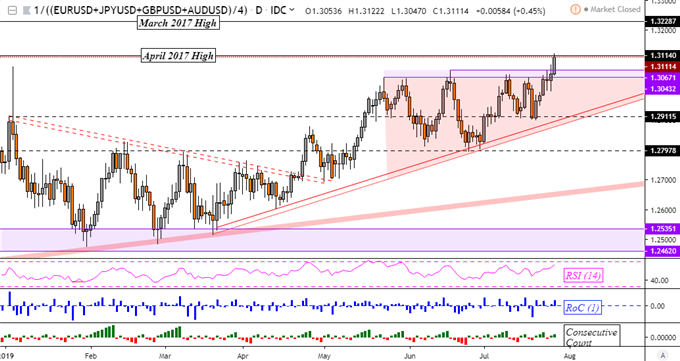