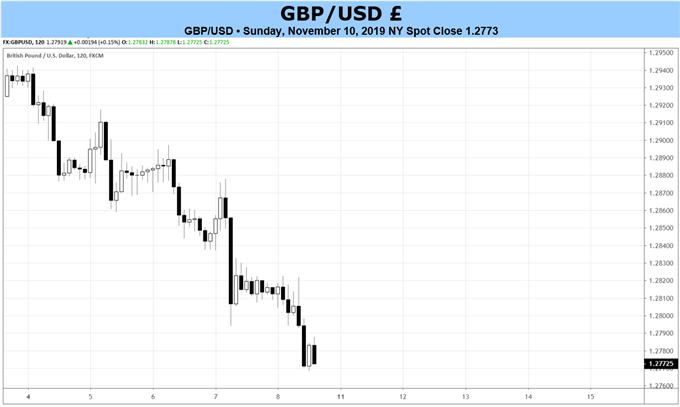 See our long-term forecasts for the British Pound and tne other major currencies with the DailyFX Trading Guides.

Amid uncertainty over how the UK snap general election will shake out on December 12, traders have been reducing exposure to the British Pound in recent days. Over the past week, after an explosive October, Sterling crosses fell back almost entirely, but for GBP/NZD which gained a mere 0.21%, and EUR/GBP, which finished last week unchanged. Elsewhere, losses proved shallow for the GBP-crosses. GBP/USD was the worst performing, losing -1.35%, thanks in part to a sharp retracement in Federal Reserve rate cut odds.

Aside from Brexit, British Pound Economic Continues to Improve

The forex economic calendar should be watched over the first few days of the week, as there are several significant data releases between Monday and Wednesday. Kicking things off on Monday, the first revision to the Q3’19 UK GDP report will be released, where it is anticipated that the headline reading will be reduced from 1.3% to 1.1% (annualized). On a more positive note, the quarterly reading is due in at 0.4% from -0.2%.

But in general, UK economic data has rebounded since the start of November, at least when trying to look at economic data from an objective point of view. The Citi Economic Surprise Index for the UK, a gauge of economic data momentum, was up to 4.3 by the end of last week from -0.3 on the final day of October.

After Monday’s Q3’19 UK GDP report, the forex economic calendar will turn to the latest UK jobs report on Tuesday then the October UK inflation report (consumer price index) on Wednesday. According to a Bloomberg News survey, the October UK inflation report will show that price pressures eased last month amid a sharp recovery by the British Pound as no-deal, hard Brexit fears dissipated; a strong domestic currency dampens import price pressures. Headline inflation is due to come in at -0.1% from 0.1% on a monthly basis and at 1.6% from 1.7% on a yearly basis. 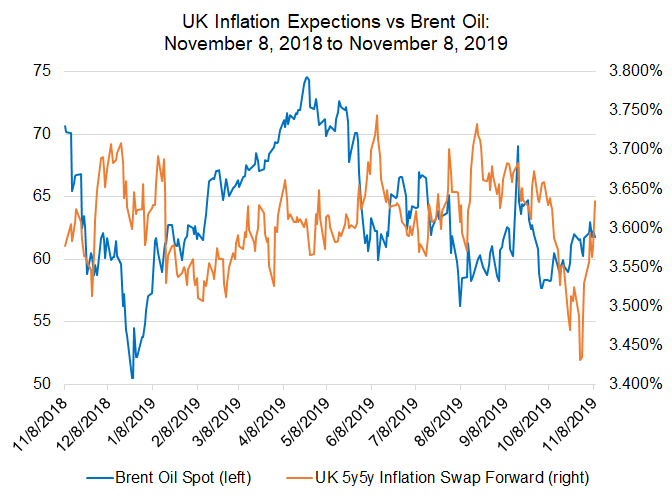 Neither UK GDP Nor CPI Report Likely to Make Waves

There are two primary reasons why traders should keep expectations low for the UK economic data due out this week: the Bank of England is unlikely to change rates anytime soon thanks to Brexit. Since the June 2016 Brexit vote, the BOE has tried to stay neutral to not appear political during the Brexit negotiations. Further reducing the likelihood of any action anytime soon is that the forthcoming policy meeting will not produce a new set of growth, inflation, and unemployment forecasts, collectively known as the Quarterly Inflation Report (QIR). 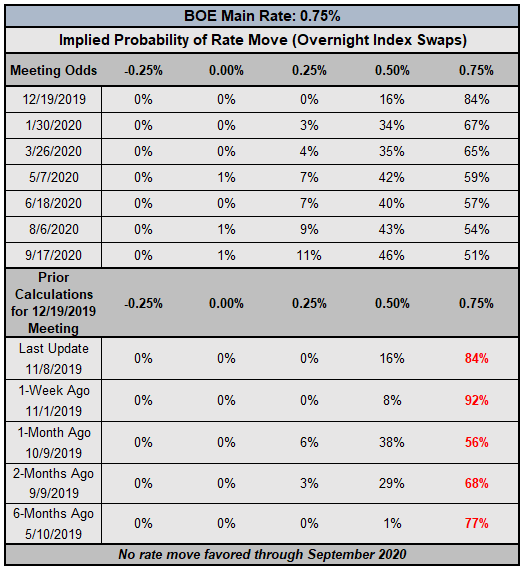 As such, rates markets are downplaying any chance of action from the BOE anytime soon, and as a result, UK economic data continues to carry less weight than data from other G10 currencies. Overnight index swaps are pricing in an 84% chance of a no change in rates at the DecemberBOE meeting.

With the UK snap general election coming into focus on December 12 and then the ensuing Brexit talks thereafter, the BOE isn’t expected to move anytime soon: the BOE’s main rate is favored to stay at 0.75% through at least September 2020. As it were, UK Prime Minister Boris Johnson has seen his Conservative Party’s polling numbers increase steadily in the past week; the Tories are comfortably ahead of Labour and the Liberal Dems. 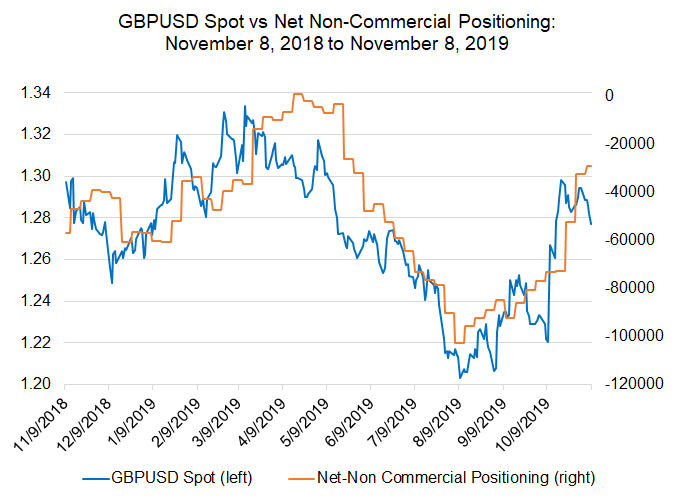 Looking at positioning, according to the CFTC’s COT report for the week ended November 8, speculators decreased their net-short British Pound positions from 32.4K to 29K contracts. But the losses by the British Pound last week came after Tuesday’s reporting period ended. Traders should expect the data to show evidence of another build in Sterling shorts in the forthcoming update on November 15. 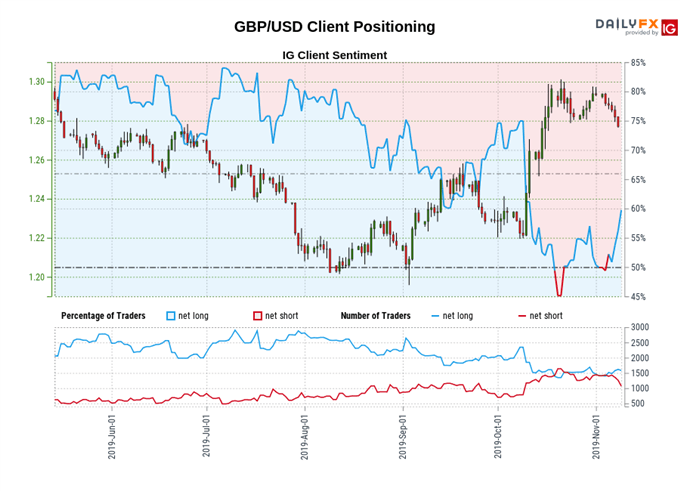 We typically take a contrarian view to crowd sentiment, and the fact traders are net-long suggests GBP/USD prices may continue to fall. Traders are further net-long than yesterday and last week, and the combination of current sentiment and recent changes gives us a stronger GBP/USD-bearish contrarian trading bias.