Is this the end of the Brexit saga? For several weeks, it appeared that a deal would be reached in order to avoid the worst case scenario ‘no deal, hard Brexit’ outcome. And while it seemed highly unlikely that either EU or UK Brexit negotiators and political leadership would walk away from discussions due to competition issues or fisheries…here we are.

Failure to reach a free trade agreement will bring about the ‘hard Brexit’ scenario feared, intensifying the negative impact of increased tariffs and import taxes faced by the UK. The economic backlash from Brexit would be harsh, make a coronavirus pandemic recovery all the more difficult.

UK Prime Minister Boris Johnson was reportedly on his way to Brussels to try and get a deal done, at the time this report was written. 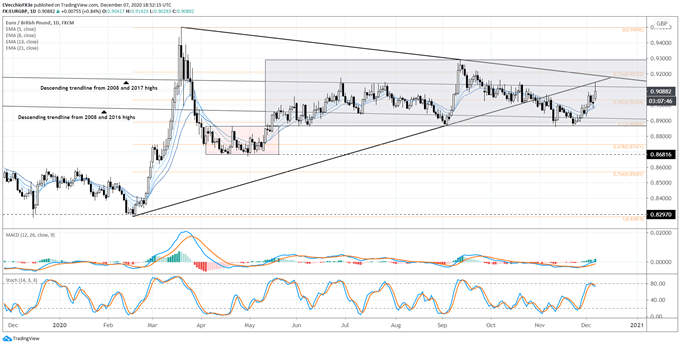 EUR/GBP rates remain rangebound, insofar as the sideways churn between 0.8865 and 0.9292 has continued despite breaking the rising trendline from the February and September swing lows (effectively the pandemic trendline). What appeared to be a chart pattern explicitly favoring an outcome that could produce more British Pound strength – the symmetrical triangle bearish breakout – has not found significant follow through.

Attention now turns to a potential bullish reversal in the context of the symmetrical triangle. EUR/GBP rates have rallied back to resistance, the rising trendline from the February and September swing lows. Achieving rates through said trendline would increase the odds of a test of range resistance at 0.9292.

However, it’s important that traders remain patient. After all, EUR/GBP rates have been trading sideways since late-June, and until the broader range support or resistance give way, there’s little technical rationale for expecting a considerable directional move.

Get Your Free EUR Forecast 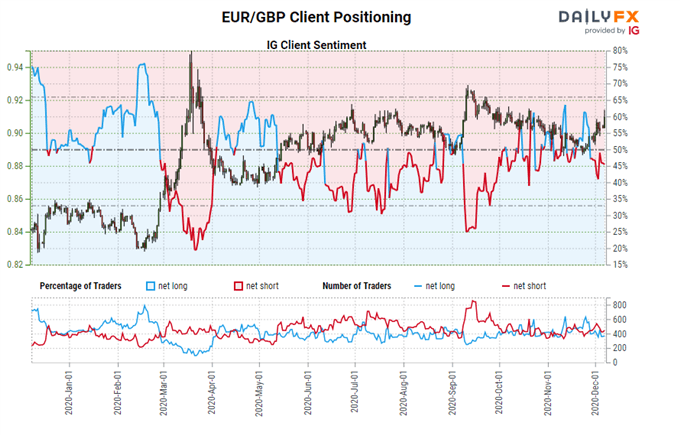 We typically take a contrarian view to crowd sentiment, and the fact traders are net-short suggests EUR/GBP prices may continue to rise.

Traders are further net-short than yesterday and last week, and the combination of current sentiment and recent changes gives us a stronger EUR/GBP-bullish contrarian trading bias.