The price of gold appears to be staging a recovery after testing the $1800 handle, but the precious metal may continue to search for support over the days ahead as the correction from the record high ($2075) appears to be a shift in market behavior rather than an exhaustion in the bullish trend.

The price of goldappears to be moving to the beat of its own drum as the precious metal trades at its lowest level since July while the US Dollar Index (DXY) seems poised to challenge the yearly low set on September 1 (91.75), and the low interest environment along with the ballooning central bank balance sheets may no longer provide a backstop for bullion amid headlines that US President-elect Joe Biden will nominate former Federal Reserve Chair Janet Yellen to be the next Treasury Secretary.

Even though Treasury Secretary Steven Mnuchin lays out plans to scale back the emergency lending facilities, the Biden administration may take a more proactive approach in supporting the US economy as the ‘Build Back Better’ initiative pledges to “provide further immediate relief to working families, small businesses, andcommunities.” As a result, the agenda for another fiscal stimulus package may encourage the Federal Reserve to endorse a wait-and-see approach at its last interest rate decision for 2020 as Chairman Jerome Powell and Co. “assess how our ongoing asset purchases can best support ourmaximumemployment and price-stability objectives as well as market functioning and financial stability.”

It seems as though the Fed will continue to utilize its balance sheet to support the US economy as the central bank plans to “increase its holdings of Treasury securities and agency mortgage-backed securities at least at the current pace,” and it remains to be seen if the Federal Open Market Committee (FOMC) will unveil a more detailed forward guidance at the next interest rate decision on December 16 as Chairman Powell and Co. are slated to update the Summary of Economic Projections (SEP). 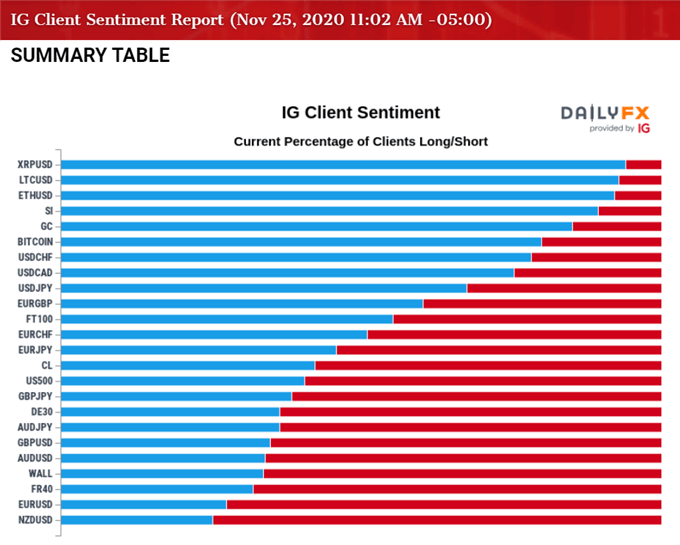 Nevertheless, the net-long US Dollar bias from earlier this year has resurfaced as the IG Client Sentiment report shows retail traders net-long USD/CHF, USD/CAD and USD/JPY, while the crowd is net-short GBP/USD, AUD/USD, EUR/USD and NZD/USD.

However, new market trends appear to be taking shape ahead of 2021 as the price of gold no longer traders to fresh yearly highs during every single month in 2020, and the correction from the record high ($2075) now appears to be a shift in market behavior rather than an exhaustion in the bullish price action as the precious metal trades at its lowest level since July.

With that said, the price of gold may continue to move to the beat of its own drum as it seems to be searching for support, but the Relative Strength Index (RSI) may show the bearish momentum gathering pace if the indicator pushes into oversold territory for the first time since 2018.