This past week ended with the VIX ‘fear gauge’ rising the most since the end of October as global equities experienced a cautious pullback. The S&P 500, DAX 30 and Nikkei 225 aimed lower. Could this be setting a sour tone for financial markets heading into 2021? Treasury yields on the longer-dated spectrum declined, signaling fading optimism on longer-term growth prospects.

Looking at currencies, the growth-linked Australian Dollar still managed to outperform, likely boosted by Chinese demand for iron ore from Down Under. This is as the British Pound declined, experiencing the worst week on average since early September. Sterling’s woes can be traced to dimming prospects of a Brexit deal, as made apparent by UK Prime Minister Boris Johnson.

Don’t give into despair, make a game plan

The US Dollar continues to weaken, and that has been a boon to commodities such as copper and crude oil. Covid vaccine prospects are likely benefiting the latter with anticipation of a steady increase in general travel. Yet, anti-fiat gold prices are struggling to capitalize on greenback declines, signaling underlying weakness despite a parallel drop in US real yields.

After the UK became the first western nation to begin rolling out a coronavirus vaccine, the US was poised to follow after the FDA recommended the approval of Pfizer’s and BioNTech’s product. The anticipation of immunization may have kept US consumer sentiment upbeat this past week, despite ongoing roadblocks to a $900 billion bipartisan fiscal package.

Republicans push for employer liability protections continued to clash with Democrat wishes for state and local government aid. Outside of fiscal affairs, keep a close eye on central banks such as the Fed, BoE and BoJ for their economic outlooks and views on unconventional policy. New Zealand releases third-quarter GDP, Australia reports the latest jobs report. What else is ahead?

What does it take to trade around data?

Crude oil prices may continue to push higher on the back of positive vaccine news, a pickup in global demand and the moderate easing of OPEC+ output cuts.

Gold is currently pushing ahead as financial markets take a sharp risk-off turn ahead of the weekend. Next week, the US dollar may weigh on this move.

The Federal Reserve’s last meeting for 2020 may shake up the near-term outlook for the US Dollar with the bank slated to update the Summary of Economic Projections (SEP).

The Dow Jones and Nasdaq 100 remain near record levels ahead of next week’s Fed meeting where slight modifications to the current framework are expected. The FTSE 100 will look to Brexit news.

Dollar was weak but Sterling was even weaker with a massive weekly reversal in GBP/USD off multi-year highs. Here are the levels that matter on the Pound weekly chart.

The Nasdaq 100 appears to have entered a brief technical correction after hitting an all-time high. The overall bullish trend remains intact but upward momentum appears to be fading.

The move higher in Aussie may at the least pause in the coming week as the trend becomes extended; short-term technical structure to wat

Crude oil prices pushed higher this past week, but conflicting technical signals hint to proceed with caution. What is the technical road ahead for WTI into the end of this year?

The Euro was in the spotlight for Thursday’s ECB rate decision. But both EUR/USD and EUR/JPY put in Dojis for the week after running into big areas of resistance.

The DXY Index has sustained major technical damage in recent weeks, having broken through the rising trendline from the April 2011 and February 2018 lows.

US DOLLAR WEEKLY PERFORMANCE AGAINST CURRENCIES AND GOLD 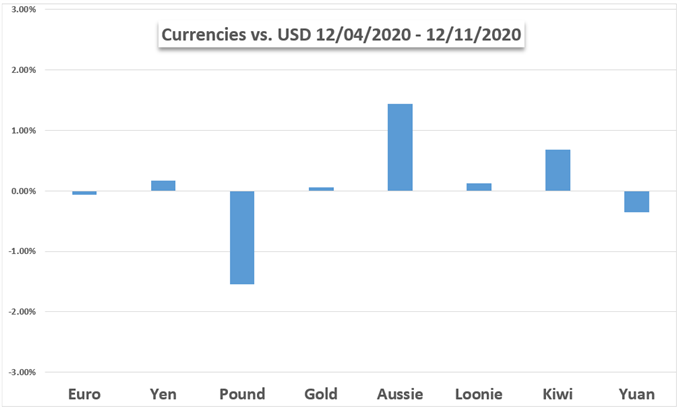