The Nasdaq 100 jumped more than 4% in Wednesday trade alongside similarly spectacular gains for the Dow Jones and S&P 500. Not to be outdone, European indices and other risk assets like the Australian and Canadian Dollars were also higher on the day. The collective price action suggests investors are comfortable gaining exposure to these “riskier” assets, despite an unfinished presidential election.

That being said, the market is likely reacting to what is known from the election. First, the notion of a “blue wave” has been dispelled as it seems Republicans will maintain control of the Senate and make minor inroads in the House of Representatives. As a result, the three chambers are poised to be divided between the two parties. A split cabinet will significantly reduce the chances that very-blue or very-red leaning proposals are signed into law – regardless of who wins the White House. 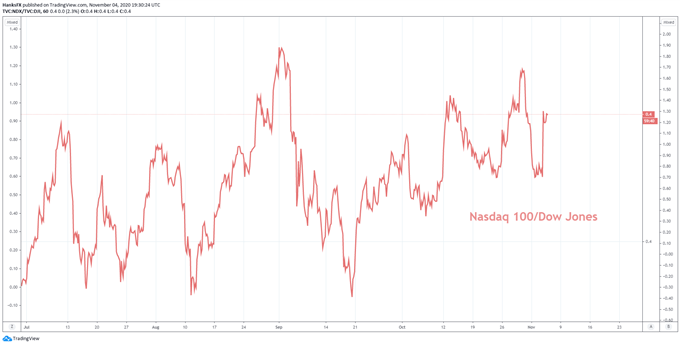 Thus, a key risk to the Nasdaq 100, in the form of repealing President Trump’s corporate tax cuts, has been reduced. This realization has likely fueled much of the rally seen in technology stocks Wednesday with big names like Facebook, Apple, Amazon, Google and Microsoft all significantly higher on the day. In my opinion, the environment has been set for continued strength in the technology sector. 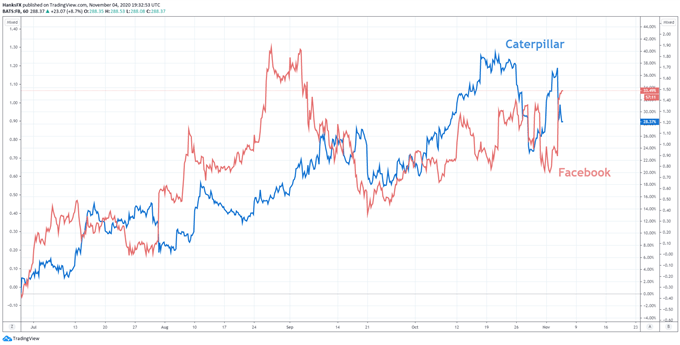 On the other hand, the chances of massive stimulus and infrastructure programs under a Biden Presidency have been reduced as Republicans maintain control in the Senate. This has led to weakness in the materials sector alongside single-stock names like Caterpillar which declined more than 4% on Wednesday.

All in all, it seems the election results that have been delivered have ushered in a landscape for an almost goldilocks-like scenario where the fringes of each party’s ideas are kept in check by the other. Therefore, the sectors we identified that might perform differently under a Trump or Biden administration could still play out regardless of who the eventual winner is. In the meantime, follow @PeterHanksFX on Twitter for updates and analysis.

Get Your Free Equities Forecast