NZD/USDbreaks out of the range bound price action from earlier this week on the back of US Dollar weakness, and the Federal Reserve interest rate decision may do little to derail the bullish price action as the central bank relies on its non-standard tools to support the US economy.

NZD/USD appears to have reversed course ahead of the 50-Day SMA (0.7096) as it extends the rebound from the monthly low (0.7096), and the pullback from the January high (0.7315) may turn out to be an exhaustion in the broader trend rather than a change in market behavior as the Fed’s balance sheet climbs to a fresh record high in 2021.

It remains to be seen if the RBNZ will continue to endorse a dovish forward guidance after unveiling the Funding for Lending Programme (FLP) at the November meeting as “the Committee agreed that it was prepared to lower the OCR (official cash rate) to provide additional stimulus if required.”

However, the update to New Zealand’s Consumer Price Index (CPI) may keep the RBNZ on the sidelines as “most Committee members agreed that risks to the baseline scenario were less skewed to the downside than they had appeared earlier in the year,” and Governor Adrian Orr and Co. may merely attempt to buy time on February 24 as the central bank carries out the FLP in tandem with the Large Scale Asset Purchase (LSAP) Programme.

Until then, swings in risk sentiment may continue to influence NZD/USD as key market themes remain in place, and it looks as though the tilt in retail sentiment will also persist as the crowding behavior from the first half of 2020 resurfaces. 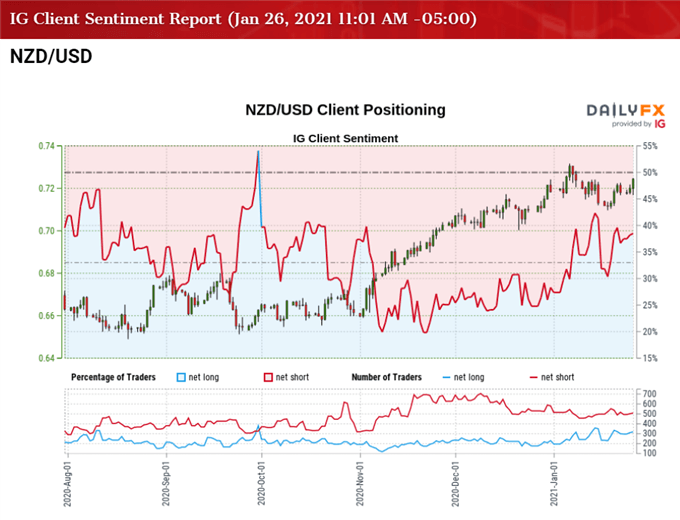 The decline in net-long position could be a function of profit-taking behavior as NZD/USD breaks out ahead of the FOMC rate decision, while the rise in net-short interest suggests the tilt in retail sentiment is likely to persist even though the exchange rate extends the advance from the monthly low (0.7096).

With that said, the pullback from the January high (0.7315) may end up being an exhaustion in the bullish price action rather than a change in trend like the behavior seen in late 2020, and the Fed rate decision may do little to derail the rebound in the exchange rate as long as the central bank retains the current course for monetary policy.