NZD/USDclears the opening range for December as the exchange rate extends the advance from the monthly low (0.7006), and the recent weakness in the exchange rate appears to have been an exhaustion in the bullish trend rather than a change in market behavior as the Relative Strength Index (RSI) pushes back into overbought territory.

NZD/USD consolidates after trading to a fresh yearly high (0.7120) as the US Dollar rebounds on the back of waning investor confidence, and swings in risk appetite may continue to sway the exchange rate as the Federal Reserve’s balance sheet approaches the record high seen in November.

It remains to be seen if the Federal Open Market Committee (FOMC) will take additional steps to support the US economy as the European Central Bank (ECB)expands the pandemic emergency purchase programme (PEPP) by EUR 500B ahead of 2021, but the ongoing response to the COVID-19 pandemic are likely to keep key market trends in place as monetary authorities rely on their non-standard measures to achieve their policy targets. 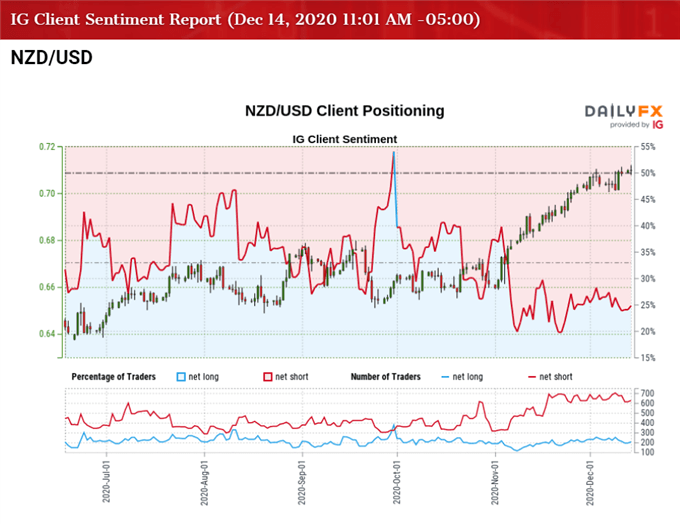 The rise in net-long position comes as NZD/USD trades to a fresh yearly high (0.7120), while the decline in net-short interest has helped to alleviate the tilt in retail sentiment as only 25.44% of traders were net-long the pair during the previous week.

With that said, the recent weakness in NZD/USD appears to have been an exhaustion in the bullish trend rather than a change in market behavior as it clears the opening range for December, and the exchange rate may continue to trade to fresh yearly highs throughout the remainder of the month as the Relative Strength Index (RSI) pushes back into overbought territory.